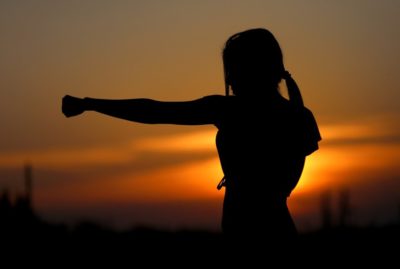 Usually, I pray for peace for my family. I pray that God calms the bickering and that I respond with patience when kids break dishes or the washing machine ceases to work.

Early this morning, while wrapped in my new fuzzy blanket and curled up comfortably in my recliner, I found myself praying for fight. I know it sounds crazy, but I feel as if I’ve been up against a lot lately. Things keep going wrong and I’m tempted to stomp my feet and yell!

As I was praying for this strength to fight and wondering if I am coming to God with two opposite requests, verses began pouring into my head.

I realized that I am once again trying to manuever these difficult situations on my own. I don’t know why, after all the pain God has walked through with me, do I still try to be brave and strong on my own?!

Contents hide
1 Does God fight for us?
2 God’s promise to Joshua
3 Chariots of fire
4 Jesus did not leave us to fight the good fight alone
5 Paul’s instructions on fighting the good fight

Does God fight for us?

The Old Testament is packed with amazing stories in which God’s power is seen in battle over the heathen.

Moses and the liberated children of Israel watching the Egyptian army drown in the the very sea they had just crossed.

An angel silently killing the entire Assyrian army while King Hezekiah and the Israelites fervently prayed for deliverance from the strong and terrifying nation.

Joshua and his army giving a loud cry after they marched around Jericho. The hand of God crumbling the indestructible.

After Moses dies and Joshua steps up as leader of the wandering Israelite people, God confirms his faithfulness.

“No man shall be able to stand before you all the days of your life; as I was with Moses, so I will be with you. I will not leave you nor forsake you.”

What does it mean that “no man shall be able to stand before you”? Joshua had a huge undertaking. The responsibility of leading a nation into the promised land and removing the heathen dwellers, was no small task. He was up against powerful kings and armies who were defending their homeland.

Joshua needed God to fight the battles for them. Just as He had shown His power and authority over the Egyptian gods, it was now time to destroy the Canaanite gods.

How can we relate to God’s promise to Joshua? Some of us are up against people who wish us harm. Maybe not physical harm, but wish to destroy us through their words and actions. To leave us feeling defeated.

Chronic illness, rejection, depression, anxiety, grief, insecurities. We all battle with one or more of these on a daily basis. No, they don’t always come with the face of a human, but aren’t they standing against us just the same?

I often think of these obstacles as our Goliaths or even our Nebachudnezzar as I wrote about awhile back in Even If-Lessons from the Book of Daniel.

The story of Elisha and the chariots of fire teaches us how much fighting God does for us that we don’t even see.

The wicked king of Syria was planning to attack Israel and at each turn, Israel was already aware of the plans and prepared to fight. The king thought he had a trader amongst him and questioned his closest men.

He learned that the prophet Elisha was being told by the Iraelite God what he was saying in secret to his soldiers. Of course, the best solution was to now be rid of this troublesome prophet.

He sent a large army to capture Elisha.

Elisha wakes up one morning to find his town completely surrounded by assyrian soldiers and chariots. His servant was afraid (I would be too!) and asked what could they do? He was probably certain that this was his end.

Elisha, being in tune with God, saw what his servant did not. His servant must have been completely bewildered when Elisha said “Do not be afraid, there is more with us than with them”

What?? Their city is surrounded by a powerful army whose goal was to capture Elisha and he says not to be afraid!

Elisha prays that his servant’s eyes might be opened. God allows the young man to see the multitude of chariots of fire which also surrounded them.

God’s army of angels, ready to fight and protect his beloved prophet.

Jesus did not leave us to fight the good fight alone

As much as I love the Old Testament stories, they are a little less practical for MY every day life. The struggles between good and evil remain and we all face our own battles.

These things I have spoken to you, that in Me you may have peace. In the world you [awill have tribulation; but be of good cheer, I have overcome the world.

Finally, my brethren, be strong in the Lord and in the power of His might. Put on the whole armor of God, that you may be able to stand against the wiles of the devil.

For we do not wrestle against flesh and blood, but against principalities, against powers, against the rulers of the darkness of this age, against spiritual hosts of wickedness in the heavenly places.

Therefore take up the whole armor of God, that you may be able to withstand in the evil day, and having done all, to stand.

Stand therefore, having girded your waist with truth, having put on the breastplate of righteousness,

and having shod your feet with the preparation of the gospel of peace;

above all, taking the shield of faith with which you will be able to quench all the fiery darts of the wicked one.

And take the helmet of salvation, and the sword of the Spirit, which is the word of God;

Truth, righteousness, gospel of peace, faith, salvation, word of God, prayer, perseverance. It’s all there, everything we need to fight the good fight!

We can spend hours discussing these particular verses, but that is not for this post. I want to point out that God provides us the tools we need to fight WITH him.

So, dear friends, I challenge you to face your opponents today and be encouraged knowing that you are NOT fighting alone!

You might also like “Healing Comes when You Face Your Fears” as it talks about courage and strength to fight fear.

4 thoughts on “Fighting the Good Fight with God”