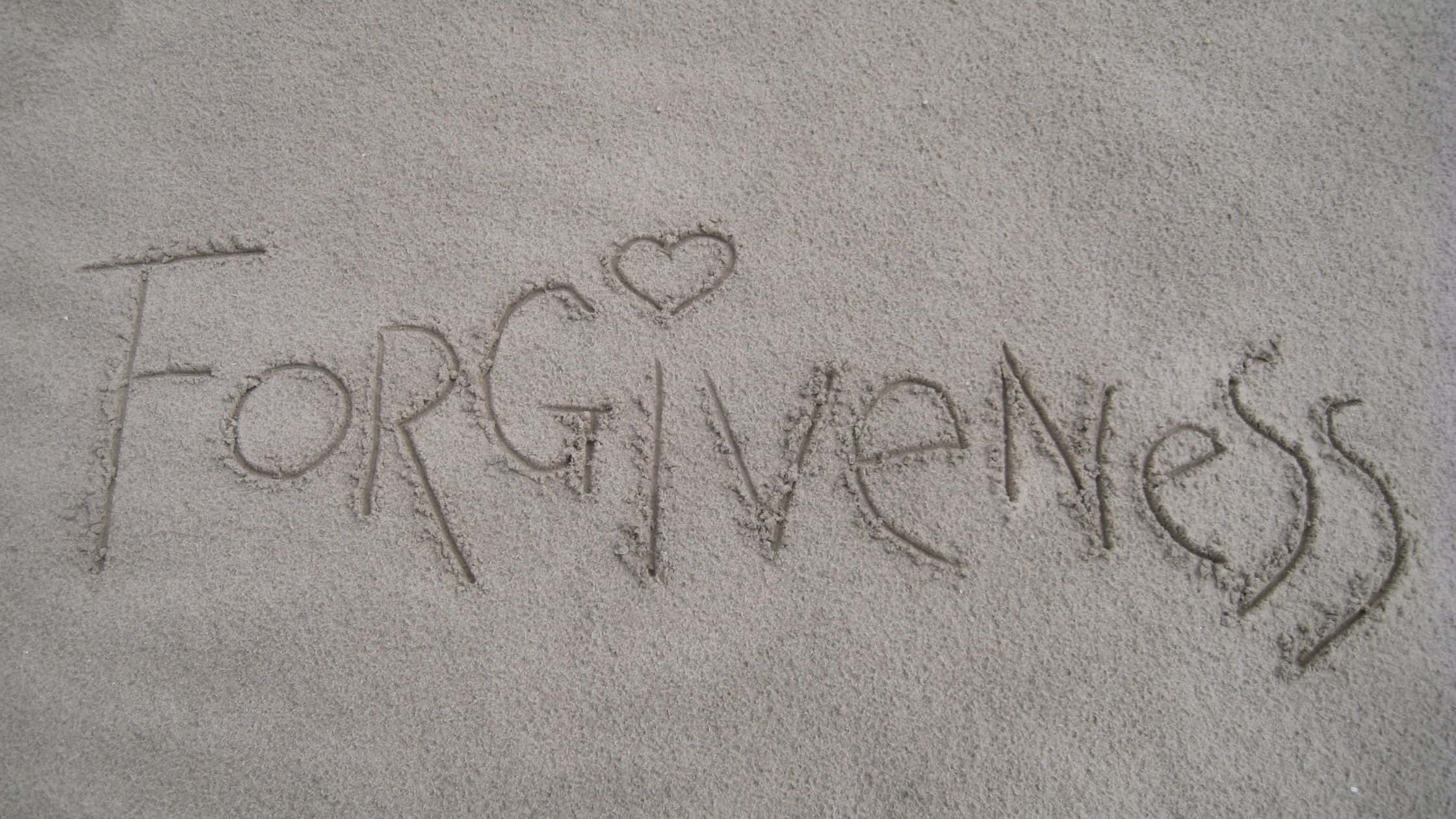 Have you ever asked yourself why forgiveness is important? You are not alone. Perhaps you struggle with forgiving someone who has wronged you or perhaps you are the one in the wrong and desperately need someone to accept your apology.

Forgiveness is not a struggle of the 21st century, it is one that has been around for thousands of years. Come along with me while we discuss why forgiveness is important, how to forgive and let go, and what Jesus teaches us about this very important topic in scripture.

Contents hide
1 The Parable of the Unforgiving Servant
2 Other Examples of Forgiveness in the Bible
2.1 What Does Jesus Teach about Forgiveness?
2.2 Why is Forgiveness Important?
3 How Do You Forgive and Let Go?

The Parable of the Unforgiving Servant

We begin searching for the answer to our question, “why is forgiveness important?” with a parable of Jesus.

The setting is ancient Israel and a crowd is following Jesus, asking him questions, begging for healing, hanging on his every word. His teachings are new, different than anything the people had heard before. Peter poses a question and everyone stops talking to listen to the answer.

“Lord, how often shall my brother sin against me, and I forgive him? Up to seven times?” (Matthew 18:21)

Jesus corrects him and tells him not seven times but seventy times seven. Of course, Jesus isn’t finished. He has the attention of the people and he wants to drive a very important point home. He launches into a story.

Jesus said to him, “I do not say to you, up to seven times, but up to seventy times seven. Therefore the kingdom of heaven is like a certain king who wanted to settle accounts with his servants. And when he had begun to settle accounts, one was brought to him who owed him ten thousand talents.

But as he was not able to pay, his master commanded that he be sold, with his wife and children and all that he had, and that payment be made. The servant therefore fell down before him, saying, ‘Master, have patience with me, and I will pay you all.’

Then the master of that servant was moved with compassion, released him, and forgave him the debt.

“But that servant went out and found one of his fellow servants who owed him a hundred denarii; and he laid hands on him and took him by the throat, saying, ‘Pay me what you owe!’ So his fellow servant fell down at his feet and begged him, saying, ‘Have patience with me, and I will pay you all.’

And he would not, but went and threw him into prison till he should pay the debt.

So when his fellow servants saw what had been done, they were very grieved, and came and told their master all that had been done. Then his master, after he had called him, said to him, ‘You wicked servant! I forgave you all that debt because you begged me. Should you not also have had compassion on your fellow servant, just as I had pity on you?’

And his master was angry, and delivered him to the torturers until he should pay all that was due to him. (Matthew 18:23-34)

Most likely you know someone with an attitude like that of the wicked servant. It’s all about them with little concern to how others are affected. They plunge thoughtlessly through life thinking only of themselves, stepping on everyone to get where they want to be.

If you are filled with indignation, you have every right to be. However, listen to the way Jesus ends this parable.

“So My heavenly Father also will do to you if each of you, from his heart, does not forgive his brother his trespasses.” (verse 35)

That’s hard to swallow, isn’t it?

If we hold a grudge against our brother, we are no better than the unforgiving servant and we will meet the same dreadful fate.

But why? Why is forgiveness so important? Let’s take a look at a few other examples of forgiveness in the Bible as well as more of Jesus’s thoughts on the topic before we answer this straight out.

Other Examples of Forgiveness in the Bible

Let’s take a look at the stories of Joseph, Jacaob and Esau, and the woman caught in adultry. Each one is a bit different but lives are changed dramatically in each one. Why is forgiveness important? Keep reading!

Joseph is probably the first story to come to mind when I think about examples of forgiveness in the Bible. A young man sold into slavery by his jealous brothers. Not only does he endure the life of a slave, but is falsely accused and thrown into prison.

Many years later, he sees his brothers and forgives them in the climax of a wonderful story of God’s grace and provision.

Jacob and Esau is another example of family drama between brothers. As twins, growing in their mother’s womb, they struggled and it didn’t end there Jacob deceives Esau and steals the coveted family blessing. Esau vows to kill Jacob, who then runs for his life.

In quite a series of events, God teaches Jacob the error of his ways and blesses him abundantly as he seeks to do what is right. Finally, after many years, Jacob returns back home with his family. He has no idea if Esau wants to kill him still but it is a risk he is willing to take.

While reading this for the first time, you will find yourself holding your breath, watching as Esau forgives Jacob and they part ways in peace, their relationship restored.

If you are at odds with your brother (physical or spiritual) you are not alone.

The woman caught in adultery is a beautiful story in that it shows the social injustice of the day and how Christ was not bound to it in any way.

Of course, man-written laws are skewed, sinful men trying to control other sinful men.  It really was no different in Jesus’s day than it is today.

This woman was caught in the act of adultery and was about to be punished.  The law God had instituted was intended to remove sin and prevent it from spreading.  Crush it, destroy it, never allow it in your towns and cities.

Of course, we all know this is impossible.  Laws don’t change the hearts of men, that was why Jesus was here.  He alone can crush and destroy sin.

The woman is alone, her male partner not being accused as he well should be.  She’s crying, begging for mercy as the righteous indignation of the group of men rises.  They pick up stones to bring her life to a cruel and painful end.

Jesus is present, watching the scene.  Holy, sinless, the son of God.  He stoops on the ground and pretends to write in the dirt, seemingly unaware of what is going on.

The men stop and ask Jesus what they should do with this woman.  If he was so great a prophet, he would follow the laws given to them thousands of years before.  Surely, this teacher of God would want sin to be punished.  No way he would overlook this ugly act.

Jesus continues to doodle in the sand as if he didn’t hear them.  He was the calm in the storm, the truly righteous one in the midst of a self-righteous cluster.

Finally, he stands and all eyes are on him.  “He who is without sin among you, let him throw a stone at her first.”

That is not what people were expecting!  Do you know what happened?

One by one the men left.  Why?  Because not one of them was without sin.  Every one of them needed forgiveness for one sin or another.

Jesus stoops back down and continues to write in the dirt while these men struggle with their consciences.

Finally, he looks up and says, “Woman, where are those accusers of yours? Has no one condemned you?”

If you are wondering why forgiveness is important, you can conclude from these stories that it changes lives.

What Does Jesus Teach about Forgiveness?

That it is necessary. He is very straightforward about it and all of the gospels include this thought.

After all, reconciliation between God and man was the purpose of Jesus’s existence.  This required forgiveness on God’s part and a blood sacrifice to cover the sin.

Jesus taught God in a way the people hadn’t heard before.  A god that was close, intimate, involved in our everyday lives.  Jesus represented the very essence of grace as he stood stretched out on that cross, his body wracked with pain, and said, “Father, forgive them, for they do not know what they do.” (Luke 23:34)

Here are a few more verses from the gospels about forgiveness.

But I say to you, love your enemies, bless those who curse you, do good to those who hate you, and pray for those who spitefully use you and persecute you, (Matthew 5:44)

Why is Forgiveness Important?

God and I went around and around with the main point of forgiveness. I was readily able to see that God wanted me to forgive others and that it was important for my emotional well being. I was willing to see that unforgiveness held me in bondage and that it holds others in bondage.

I knew that unforgiveness ruins relationships and prevents peace and love from growing, but that wasn’t enough. There was more God wanted me to accept.

What I was having trouble confessing and the point I want to drive home in this post is this.

We are required to forgive others because we do not deserve forgiveness ourselves and have received it abundantly, with no strings attached.

I know this hurts, but you are also a sinner and do not stand before God any cleaner than the person who wronged you. When we have this attitude, it seems almost impossible NOT to forgive.

How Do You Forgive and Let Go?

So, how do you forgive and let go? There is not a magic formula that sets you free.

It is important to pray and ask God for help.  Repenting for the unforgiveness in your heart will also help you to let go.

Studying verses and stories of forgiveness will impress the importance upon you, but it the end, its really a matter of decision on your part.  You must decide to follow God’s instructions and forgive the person who has wronged you.

Recently, I was struggling with forgiveness and each time the scenario that caused my pain would replay in my mind, I would pray for the person who had hurt me.  I know it sounds crazy, but it really helped remove the bitter feelings and it brought me a lot of peace.

Now, that we’ve answered the question, “why is forgiveness important?” how are you feeling?  I’d love to hear your thoughts in the comments below!