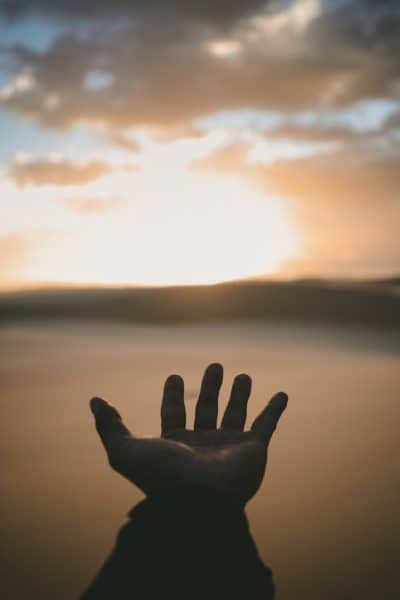 The Bible story of Jesus healing the woman with an issue of blood after bravely touching the hem of his garment. is so important that it is recorded three times. Why? I believe it is meant to give us hope. How many of us need to hear the words “your faith has made you well,”?

Are you in season of life in which you need healing? We need healing on so many levels, am I right? Spiritual healing, physical healing, emotional healing, which are you reaching out for today?

The story of the woman who touched the hem of his garment is a beautiful example of what God has in store for each of us.

Reaching Out in Faith and Touching the Hem of His Garment

But as He went, the multitudes thronged Him.

Now a woman, having a flow of blood for twelve years, who had spent all her livelihood on physicians and could not be healed by any, came from behind and touched the border of His garment. And immediately her flow of blood stopped.

And Jesus said, “Who touched Me?”

When all denied it, Peter and those with him said, “Master, the multitudes throng and press You, and You say, ‘Who touched Me?’

”But Jesus said, “Somebody touched Me, for I perceived power going out from Me.”

Now when the woman saw that she was not hidden, she came trembling; and falling down before Him, she declared to Him in the presence of all the people the reason she had touched Him and how she was healed immediately.

Lessons from the Woman Who Touched the Hem of His Garment

I could actually leave these words to speak for themselves because what can I say to add any worth to the story? BUT because I’m chatty I want to share with you why I like it.

Need a few more healed by faith scriptures? May these stories stir hope in your heart, no matter what your situation.

And it happened when He was in a certain city, that behold, a man who was full of leprosy saw Jesus; and he fell on his face and implored Him, saying, “Lord, if You are willing, You can make me clean.”

Did you notice that the leper’s very request shows his faith?

35 Then it happened, as He was coming near Jericho, that a certain blind man sat by the road begging. 36 And hearing a multitude passing by, he asked what it meant. 37 So they told him that Jesus of Nazareth was passing by. 38 And he cried out, saying, “Jesus, Son of David, have mercy on me!”

39 Then those who went before warned him that he should be quiet; but he cried out all the more, “Son of David, have mercy on me!”

40 So Jesus stood still and commanded him to be brought to Him. And when he had come near, He asked him, 41 saying, “What do you want Me to do for you?”

He said, “Lord, that I may receive my sight.”

42 Then Jesus said to him, “Receive your sight; your faith has made you well.” 43 And immediately he received his sight, and followed Him, glorifying God. And all the people, when they saw it, gave praise to God. (Luke 18:35-43)

He was as determined as the woman who touched the hem of his garment! Check out Bible Verses about Hope and Healing for more encouraging verses!

Now when He concluded all His sayings in the hearing of the people, He entered Capernaum. 2 And a certain centurion’s servant, who was dear to him, was sick and ready to die. 3 So when he heard about Jesus, he sent elders of the Jews to Him, pleading with Him to come and heal his servant. 4 And when they came to Jesus, they begged Him earnestly, saying that the one for whom He should do this was deserving, 5 “for he loves our nation, and has built us a synagogue.”

6 Then Jesus went with them. And when He was already not far from the house, the centurion sent friends to Him, saying to Him, “Lord, do not trouble Yourself, for I am not worthy that You should enter under my roof. 7 Therefore I did not even think myself worthy to come to You. But say the word, and my servant will be healed. 8 For I also am a man placed under authority, having soldiers under me. And I say to one, ‘Go,’ and he goes; and to another, ‘Come,’ and he comes; and to my servant, ‘Do this,’ and he does it.”

9 When Jesus heard these things, He marveled at him, and turned around and said to the crowd that followed Him, “I say to you, I have not found such great faith, not even in Israel!” 10 And those who were sent, returning to the house, found the servant well who had been sick (Luke 7:1-10)

The Centurion’s faith was strong enough to heal his servant. We know nothing about that servant, except that he was made well because of the faith of his employer!

Doesn’t this show what faith can do??

Your Faith has Made You Well

What about modern-day miracles? This is Jesus, 2.000 years ago. Can we still apply it to our lives? Absolutely! Why Faith Matters to My Family and A Whisper in the Lilacs are inspiring stories of faith and healing.

So, dear friends, I challenge you today to be the people in these stories! Don’t allow the obstacles in life to stand between you and your healing. Muster your faith and your courage, touch the hem of his garment, and soak in the words “be of good cheer, your faith has made you well”.

9 thoughts on “Your Faith has Made You Well: Touching the Hem of His Garment”