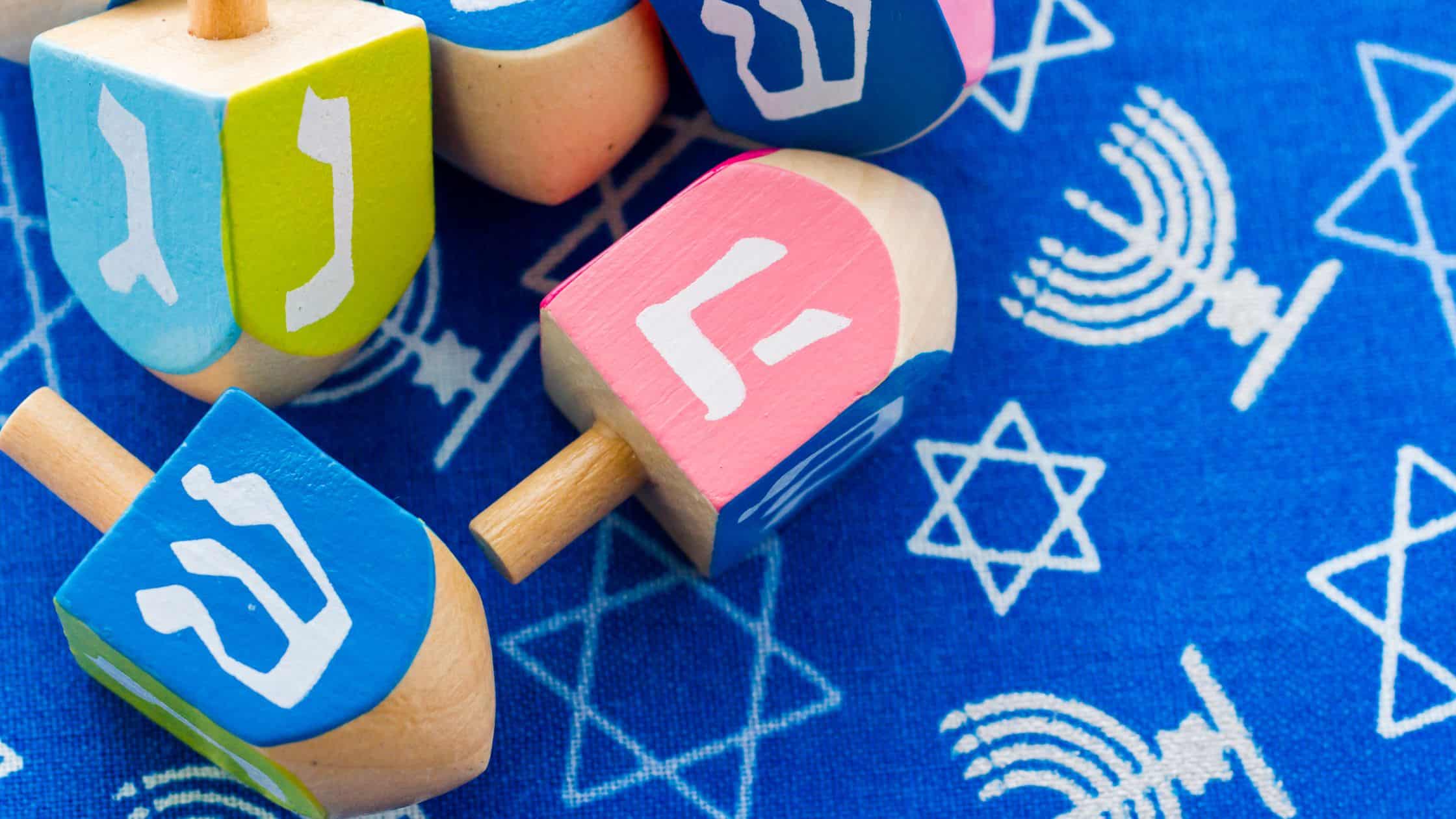 Menorahs, blue lights, the star of David, and dreidels fill the store shelves in December along side the Christmas trees, red bows, and Santa. One holiday for Jews and one for Christians and many are happy to keep the two completely separate. I love the idea of celebrating both. This post will teach how to celebrate Hanukkah and the wonderful history and traditions that surround it.

While Hanukkah is not commanded by God to be observed in scripture, nor is the story included in the Christian Bible, it remains a story worth retelling in celebration of God’s goodness, mercy, and miracles.

Hanukkah is mentioned in the New Testament as the “Feast of Dedication”.

Now it was the Feast of Dedication in Jerusalem, and it was winter.  And Jesus walked in the temple, in Solomon’s porch.  (John 10:22-23)

The history of Hanukkah contains a wonderful story of how God helps those who stand for truth and well worth teaching to your children. Before getting started, I want to emphasize this is meant to get your family familiar with and enjoying Hanukkah. There is a lot more that could be included and leaves much for you to research on your own if you wish to add more traditions to your yearly celebration.

How to Celebrate Hanukkah: The History of Hanukkah

The story takes place during the “silent years”, the four hundred year period between the Old and New Testaments. It is recorded in the Book of the Maccabees and secular history confirms most of it.

The Story of the Maccabees

Before the Roman Empire grew to an incredible size, the Syrian Empire was on the rise. There is some dispute about the actual dates, but we know it was around 168 BC that Antiochus Epiphanes IV, ruler of the Syrian Kingdom, put forth efforts to unite the provinces under his control.

He decided that all of his provinces should be of the same religion and participate in the same cultural practices. This meant that the Jews must stop worshipping the true God, sacrificing in their temple according to God’s laws, and practicing the fundamental elements of their faith.

He embarked on this campaign with a vengeance, marching into Jerusalem, vandalizing the temple, erecting an idol, and sacrificing a pig on the altar. He announced that celebrating the Sabbath and circumcising was now punishable by death.

In short, the Jews were no longer allowed to observe Judaism. Instead, they were forced to worship false gods and go against everything God had instructed them to do.

When the Syrian soldiers in charge of overseeing this horrible campaign entered Modine (about 12 miles away from Jerusalem) they ordered Mattathias, a priest, to set an example and sacrifice a pig on a pagan altar. When he refused, things got ugly which resulted in Mattathias killing the soldier.

With the rallying cry “Whoever is for God, follow me!” Mattathias and his five sons (Jonathan, Simon, Judah, Eleazar, and Yohanan) fled to the hills and caves of the wooded Judean wilderness.

Three long years of fighting followed as faithful Jews defended their faith and fought off the Syrian army. The revolt was first led by Mattathias who dies and hands the torch to Judah.

What is the Miracle of Hanukkah?

The Maccabees and their army make their way to the temple in Jerusalem. Three years after the beginning of the revolt, they finally have the temple in their control. They clean it out, fix up the broken, and restore it for worship and sacrifices.

Here is where the miracle of Hanukkah takes place.

The Maccabees declare a dedication of the temple by lighting the menorah and establishing sacrifices again and holding an 8 day celebration. The problem is, they only have a small amount of oil for the menorah, not nearly enough for the needed 8 days.

However, God in His goodness, kept the menorah burning for the full 8 days until more oil could be obtained.

And the celebration of Hanukkah began, remembering God’s grace and help as faithful men and women chose to serve God rather than succumb to man’s wickedness.

What do the Eight Candles Represent?

A Hanukkah menorah has 9 candles, four on each side with a taller one in the middle. The eight candles represent the eight days the menorah burned in the temple on such a small amount of oil. The ninth candle is called the shamash and is used to light the other candles.

How to Celebrate Hanukkah

Like every other holiday, each family and region will celebrate Hanukkah in its own way. Some have bought into commercialism, some keep strictly religious. Some areas celebrate with different foods than others. Some enjoy large parties while others keep it simple.

If you are looking into how to celebrate Hanukkah, it always begins with the menorah.

How to Light the Menorah

The candles are placed in the menorah from right to left (just as Hebrew is written from right to left), but are lit from left to right. The shamash candle is always the first one lit, and is used to light the others, starting with the left-most one.

Special prayers are recited. Go to “How to Light the Menorah” by My Jewish Learning to print the prayers.

I’m sure there are many Hanukkah traditions that vary from family to family. I’m touching on gifts, dreidel, family, and food.

Gifts were not originally a part of Hanukkah. Gold coins were traditionally given, but many believe this has changed because of Christmas. No surprise that gifts are much more of a priority in America than many other countries.

Gift giving during Hanukkah varies from family to family. Some give money, some give one small gift each night, and some choose one large family gift as the Hanukkah gift.

Dreidel is a fun game played during Hanukkah. There are many explanations as to how this game became linked to Hanukkah as no such game was played during the Maccabees. The standard explanation is that the letters nun, gimmel, hey, shin, which appear on the dreidel in the Diaspora, stand for nes gadol haya sham–“a great miracle happened there,”while in Israel the dreidel says nun, gimmel, hey, pey, which means “a great miracle happened here.”

Check out this video for instructions on how to play.

While there are many public activities with a Hanukkah theme, mostly it is spent at home with family and friends. What a lovely holiday, full of history, good food, and family.

This is part of my “Celebrating Jewish Holidays” series. If you are enjoying learning how to celebrate Hanukkah, be sure to check out the other posts!

Food is the center of many holidays and Hanukkah is no exception! As you learn how to celebrate Hanukkah, you will love exploring this side of the traditions. Embrace the season with these Hanukkah recipes!

Classic Latke Recipe– The miracle of the oil is carried into the food with latkes. Basically a fried potato pancake of sorts, latkes are probably the first food to spring to mind when you think of Hanukkah. They are simple to make and are delicious with apple sauce or sour cream. Check out Classic Latke Recipe by Delish!

Serious Eats has its own Old Fashioned Latkes Recipe with which they use a food processor. Be sure to check theirs out as well!

Sufganiyot (jelly donut) Recipe– Another popular Hanukkah food is sufganiyot, or jelly donuts, fried to perfection and dusted with sugar. With an emphasis on oil again as well as a celebration of the sweet seasons of life, they are a treat we all look forward to. Delish has a Best Sufganiyot Recipe worth checking out.

Tori Avey goes through the history of the sufganiyot (all the way back to a German cookbook published in 1482!) She also gives wonderful directions. Check out her Jelly Filled Hanukkah Donut post!

Cheese Blintz– A well loved Ashkenazi dish that is popular year-round, but makes a perfect addition to any Hanukkah menu. Delish puts a secret ingredient in their recipe. Be sure to check out Delish’s Cheese Blintz Recipe.

Noodle Kugel– a cheesy noodle dish that is sure to be a crowd pleaser. It can be made in a variety of ways. Check out this Sweet Noodle Kugel Recipe by Taste of Home.

Braised Brisket Recipe– is a popular main dish for most Jewish holidays. While Americans are used to barbecue brisket, this piece of meat that adorns the Jewish dinner table is braised often with carrots, potatoes, and other vegetables.

Check out this delicious Braised Hanukkah Brisket at Taste of Home.

I am not the world’s craftiest person, but we have to have Hanukkah crafts! I’m going to refer you to some great ideas from other (craftier!) bloggers.

This craft is perfect for preschool/kindergarten and uses clothespins, paper plates, and chenille stems. Sure to be something you put up every year.

These handprint menorahs are a family favorite for us. We also made them with our homeschool group one year which was a lot of fun! Handprint crafts are always great for gifts as well as keepsakes. Check out this Hanukkah craft at Fun Family Crafts!

The dreidel is a fun game played during Hannukah. Here is a lovely dreidel banner. It is made from felt and has simple designs on it. Perfect for older kids or as a family project with a range of ages (many Hanukkah crafts are geared toward younger kids).

Here is another fun Hanukkah craft involving dreidels. This one is from Parents.com and is great to make as a family. A template is provided that you trace onto cardstock. The dreidels are cut out and assembled. The best part is that each family member secretly writes a fun activity for the family to do on the inside of their dreidel.

If you have a little builder (or an older one as my 15 year old still loves playing with Legos!) at home, you are going to love this Lego menorah. Keep hands and minds busy with this Hanukkah craft from What We Do All Day. This project leaves lots of room for creativity and individuality.

So, here it is. A quick overview of how to celebrate Hanukkah with your family. I hope this inspires you to study more whether it is history, crafts, or recipes.