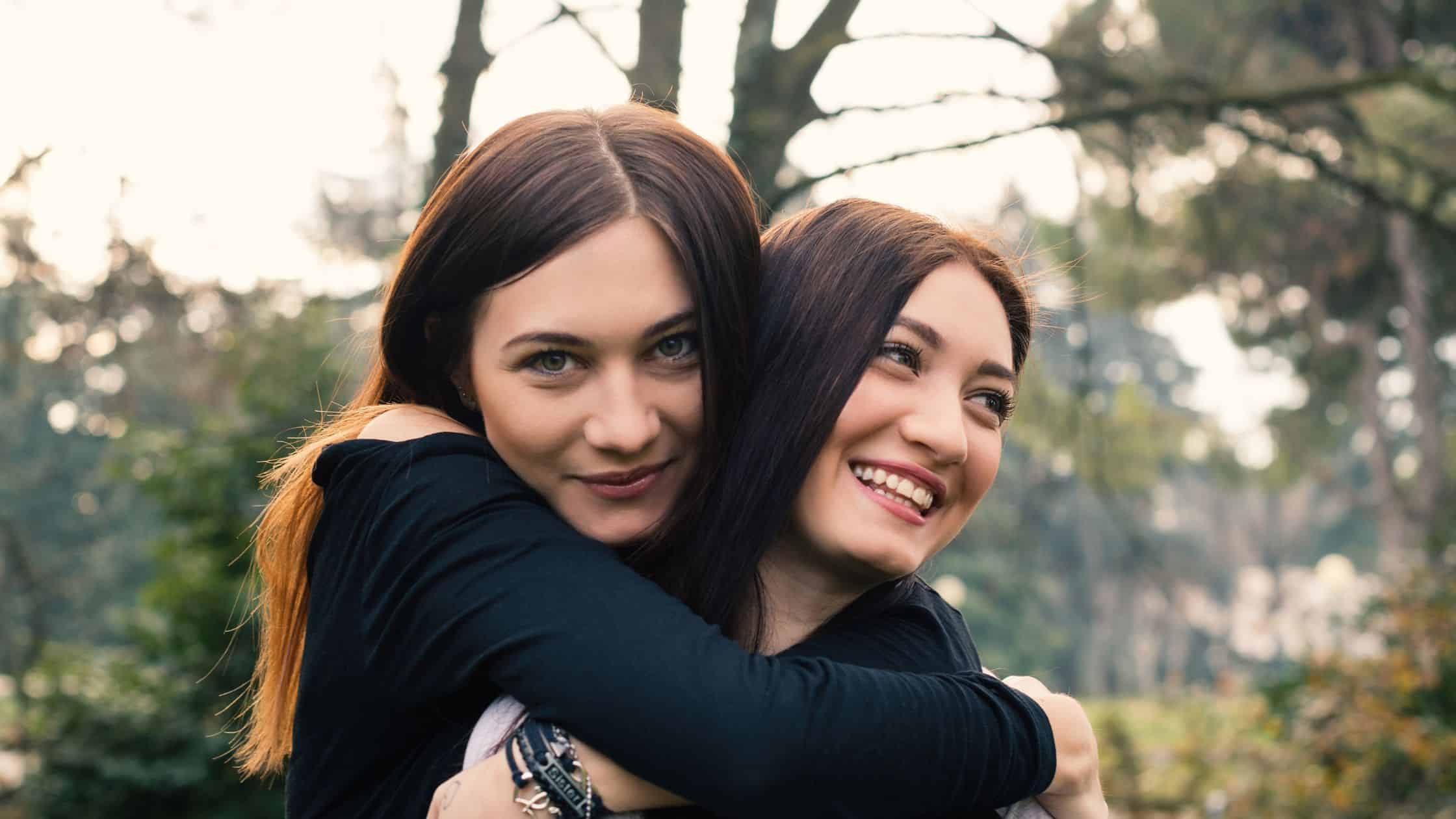 The Mary and Martha Bible story is one that is referenced often by women. Have you ever heard the expression, “don’t be a Martha.”? Some women find their personalities align with one sister over the other.

Let’s take a closer look at the Bible story of Mary and Martha that tends to be the first one people think of, but also a few other portions of scripture.

Mary, Martha, and Lazarus were friends of Jesus. The Bible includes three important stories about them. We can tell from these stories that the siblings had the wonderful opportunity to know Jesus personally.

What Was Jesus’s Relationship with Mary and Martha?

We first meet these friends in Luke chapter 10 when Martha invites Jesus and his disciples into the home she shared with Mary and Lazarus.

Now it happened as they went that He entered a certain village, and a certain woman named Martha welcomed Him into her house.

And she had a sister called Mary, who also sat at Jesus’ feet and heard His word.

But Martha was distracted with much serving, and she approached Him and said, “Lord, do You not care that my sister has left me to serve alone? Therefore tell her to help me.”

And Jesus answered and said to her, “Martha, Martha, you are worried and troubled about many things. But one thing is needed, and Mary has chosen that good part, which will not be taken away from her.”

This is your classic Mary and Martha story from which numerous lessons have been taught and learned. Before I explain my take on it, I’d like to include the other stories.

Now a certain man was sick, Lazarus of Bethany, the town of Mary and her sister Martha.

It was that Mary who anointed the Lord with fragrant oil and wiped His feet with her hair, whose brother Lazarus was sick. Therefore the sisters sent to Him, saying, “Lord, behold, he whom You love is sick.”

When Jesus heard that, He said, “This sickness is not unto death, but for the glory of God, that the Son of God may be glorified through it.”

Now Jesus loved Martha and her sister and Lazarus.

Jesus deliberately delays going to help Lazarus because God has a much bigger plan (yes, a lesson to be learned here as well but I will try to stay focused!). Lazarus dies and it’s then that Jesus goes to Bethany.

Then Martha, as soon as she heard that Jesus was coming, went and met Him, but Mary was sitting in the house.

Now Martha said to Jesus, “Lord, if You had been here, my brother would not have died. But even now I know that whatever You ask of God, God will give You.”

Jesus said to her, “Your brother will rise again.”

Martha said to Him, “I know that he will rise again in the resurrection at the last day.”

Jesus said to her, “I am the resurrection and the life. He who believes in Me, though he may die, he shall live. And whoever lives and believes in Me shall never die. Do you believe this?”

She said to Him, “Yes, Lord, I believe that You are the Christ, the Son of God, who is to come into the world.”

And when she had said these things, she went her way and secretly called Mary her sister, saying, “The Teacher has come and is calling for you.”

As soon as she heard that, she arose quickly and came to Him. Now Jesus had not yet come into the town, but was in the place where Martha met Him.

Then the Jews who were with her in the house, and comforting her, when they saw that Mary rose up quickly and went out, followed her, saying, “She is going to the tomb to weep there.”

Then, when Mary came where Jesus was, and saw Him, she fell down at His feet, saying to Him, “Lord, if You had been here, my brother would not have died.”

Do you hear each girl’s faith? The first words out of their lips were that their beloved brother would not have died had Jesus been there. Martha goes a little further and professes an even greater faith when she proclaims who Jesus is-the Christ, the son of God.

Jesus raises Lazarus from the dead and God is glorified in a triumphant power over death miracle.

The last story from John chapter 12 takes place in the days leading up to the crucifixtion.

Then, six days before the Passover, Jesus came to Bethany, where Lazarus was who had been dead, whom He had raised from the dead.

There they made Him a supper; and Martha served, but Lazarus was one of those who sat at the table with Him. Then Mary took a pound of very costly oil of spikenard, anointed the feet of Jesus, and wiped His feet with her hair. And the house was filled with the fragrance of the oil.

But one of His disciples, Judas Iscariot, Simon’s son, who would betray Him, said, “Why was this fragrant oil not sold for three hundred denarii and given to the poor?” This he said, not that he cared for the poor, but because he was a thief, and had the money box; and he used to take what was put in it.

But Jesus said, “Let her alone; she has kept this for the day of My burial. For the poor you have with you always, but Me you do not have always.”

What Can We Learn From Mary and Martha?

These three siblings shared their strong faith in Christ. They loved Jesus just as much as he loved them and I think they would have done anything for him. A friend of Jesus, isn’t that a beautiful thought?

This is where their similarities end. Not much is said about Lazarus, but the personalities of Mary and Martha are clearly portrayed.

Martha is seen serving twice. As was customary in those days (and let’s be honest, our day as well) Martha was busy showing hospitality toward her guests. She was cooking, serving dishes of food, pouring and refilling drinks, as well as clearing plates, and washing dishes.

Mary is sitting with the men (not acceptable behavior at the time) and listening to Jesus rather than helping Martha. Martha becomes frustrated with her sister. I love that she marches right up to Jesus and tells him to make her sister help her. Rather than stewing about it she goes straight to the most important person in her house and demands he does something about it.

She was probably a bit disappointed (and convicted) with his response.

“And Jesus answered and said unto her, Martha, Martha, thou art careful and troubled about many things: But one thing is needful: and Mary hath chosen that good part, which shall not be taken away from her.”

It is noteworthy that Jesus first points out that Martha is troubled about many things. I believe he is talking about more than simply serving a houseful of guests. He was looking into her heart.

He then says that one thing is needful and Mary has chosen it. What is the one thing that is needful? Both girls believed in who Jesus was. Faith is not the issue here. What was Mary doing that Martha wasn’t?

She was listening to Jesus.

Right there at that moment, God was working in Mary’s heart and she was responding. She was willing to put all of her doubts and fears and worries aside and simply listen to Jesus. It was time for Mary to grow. She could not be serving because something more important was going on inside of her.

We see this later when she goes out and buys the expensive ointment and anoints the feet of Jesus. This is not something that she planned with reason. She felt the urging of God and obeyed it. She could not have possibly known the reason for this urging, but Jesus did.

Mary was able to feel and obey that urging because she had been listening to Jesus. Her heart was not trouble and worried about much. She had set all that aside. It was her time to grow.

Now, back to Martha. The Bible doesn’t say what she did after Jesus told her to leave Mary alone. She may have set her trays down and joined the group, but I doubt it because we again see her serving in the story with Mary and the oil.

Does this mean she should have stopped serving and follow Mary? I don’t think so. They are two different people and God was working in them differently. Martha was expressing her love in her own way. She was serving. She was most likely cooking the best dishes that she could and presenting them with grace and humility. Her love for Jesus was as great as Mary’s, but she just wasn’t there yet. She wasn’t ready to put aside her worries and anxieties just yet.

It wasn’t her time to grow.

This is the last we read about Mary, Martha, and Lazarus. I wish we knew more, but I can guess that they mourned Jesus’s death and then rejoiced at his resurrection. I imagine they were among those who watched him ascend into heaven and then waited for the promised Comforter.

Where are you, dear friend, giving or growing??

What can we learn from other women in scripture? Reach back through time and connect with these amazing women!

The Mary and Martha Bible Story: Applying it to Your Life

Let’s look at all three Mary and Martha Bible stories and make a list of ways to apply their lessons to our lives. Isn’t that what scripture is about? Taking the stories of faithful (and wicked!) people and learning from them?

What did you learn from the Mary and Martha Bible stories? Which of these stories speak to you in your season of life? I’d love for you to share in the comments below!

This is one part in a series of Biblical Siblings. Visit these lovely bloggers to read more!

One Determined Life on https://onedeterminedlife.com/5-ways-to-build-trust-with-our-siblings/ 5 Ways to Build Trust with Our Sibling

Joy in the Journey on https://joyinthejourney.blog/?p=75Rachel and Leah

Embracing the Joy of the Lord

12 thoughts on “Mary and Martha Bible Stories: A Time to Grow and a Time to Give”