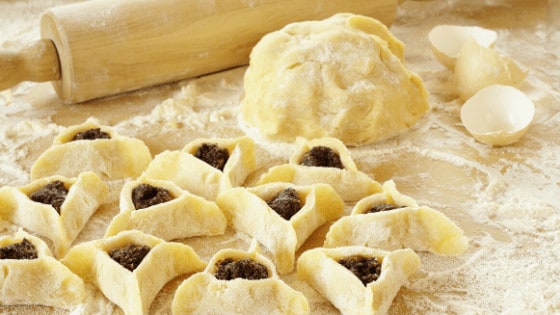 I am excited to present the fourth post in our series on Jewish feasts (or holidays). Exploring how to celebrate Purim is fun as it has a more festive feel than the serious, soul searching traditions of several of the other feasts.

As is true with many of these ancient feasts, I find that the traditions have changed over the years adding a richness and history that is fascinating.

Let’s begin with the history of Purim which brings us back to ancient Persia and the time of the Jews exile. These are the facts fairy tales are made from. A beautiful young maiden, a king with a temper, an evil adversary, and a happily ever after ending.

The story of Esther begins with King Ahasuerus who rules 127 provinces from India to Ethiopia. His wealth and power were to be admired. He has created a large feast for all the important noblemen of his empire. Endless eating and drinking and (who knows what else),

After seven days of drinking, the king wishes to show off his beautiful Queen Vashti to the important men gathered together.

She refuses. A bold choice for a woman in those days and unfortunately, she is made an example of.

He becomes angry and exiles her from his kingdom.

After a time he regrets his hasty decision and his attendants suggest he find a new wife. They propose beautiful young women be brought in from around his kingdom.

Enter Hadassah and Mordecai. Hadassah had lost her parents and her uncle Mordecai had raised her as his own daughter.

Hadassah is hauled off with the other beautiful young women and brought to the palace. Mordecai makes her promise to not tell anyone that she is a Jew and changes her name to Esther.

Esther is chosen to be the next queen.

Hamaan is King Ahasuerus’ right-hand man and he hates Mordecai. Hamaan is prideful and enjoys flaunting himself around the city. Mordecai has no respect for Hamaan and refuses to bow to him.

This angers Hamaan so much that he decides to kill not only Mordecai but all of Mordecai’s people. The exiled Jews.

When Mordecai hears this he tore his clothes and sat at the king’s gate crying and wailing in sackcloth and ashes.

Esther hears about Mordecai’s actions and then Hamaan’s evil plan is revealed to her. My favorite verses from the whole book are spoken here as Mordecai begs Esther to go to the king on behalf of her people.

“Do not think in your heart that you will escape in the king’s palace any more than all the other Jews. For if you remain completely silent at this time, relief and deliverance will arise for the Jews from another place, but you and your father’s house will perish. Yet who knows whether you have come to the kingdom for such a time as this?” (Esther 4:13-14 NKJV)

The Persians had a strange law forbidding people to come before the king unless they had been summoned. It was dangerous for Esther to approach the king without him sending for her. The penalty was death.

Esther and all of the Jews fast for three days and she bravely comes before the king. King Ahasuerus allows his queen to make her request known.

After a series of events, Esther informs the king of Hamaan’s evil plot. Hamaan and his family are hung and cannot proceed with the wicked plan. However, Hamaan had already prepared for war by sending letters to all the provinces and it was too late to stop them. Esther begs the king to make an order telling the Jews to rise up and defend themselves.

A bloody battle ensues with the Jews successfully defending themselves.

And that is the history of Purim.

I’m a facts girl! A few more facts about Purim not included in our history.

What Food Do You Eat On Purim?

Ok, so how to celebrate Purim? Let’s start with the food! Like all Jewish feasts, part of the fun is the amazing foods that have become traditional.

Check out “How to Make Perfect Hamantaschen” by Tori Avey.

Some say Esther was a vegetarian (and refused to eat meat to ensure what she was eating in the palace was kosher) with a strong taste for poppy and caraway seeds. Many Purim foods are prepared with this in mind.

Persian spinach and pine nut kuku which has a rich history explained at Reform Judaism.

Kulich is a long braided challah loaf that is meant to look like a rope. The rope Haaman had intended to hang Mordecai on, but was used on himself instead. Check out this Kulich recipe as well as recipes for many other Purim foods around the world at Aish.

How to Celebrate Purim

Isn’t the story of Esther amazing? I enjoy studying the traditions the Jews keep and teaching them to the kids. I’m already planning a Purim party!

A couple more tips for how to celebrate Purim!

It is a common practice for both kids and adults to dress in Purim costumes during this fun holiday. I have read a few explanations as to why.

Some say that Esther hid that she was a Jew. Others claim that God’s work is “hidden” throughout the story of Esther, while still others claim that it began in the 13th century Italy and is in connection to “Fat Tuesday” or the day before Lent.

Exodus 17:8-16 is read in the morning service. This is the story of Joshua waging war against Amalak- Haman’s ancestral nation. This took place nearly one thousand years before Esther!

A few other Purim traditions are:

Do you celebrate Purim? I’d love to hear from you in the comments below! As for me, I am excited to bake hamantaschen 🙂

Now is as good a time as any to focus on gratitude with your kiddos! Click the link below to check out this cute gratitude journal for kids!

How to Celebrate Rosh Hashanah with Your Family

How to Celebrate Yom Kippur with Your Family

How to Celebrate Sukkot with Your Family

8 thoughts on “How to Celebrate Purim with Your Family”