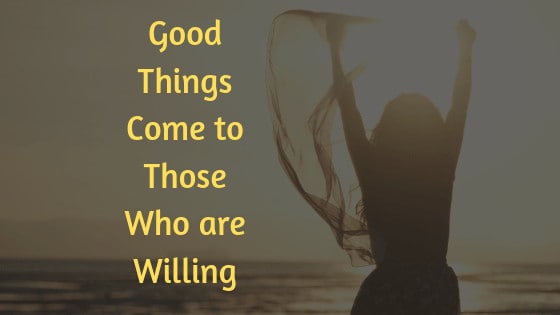 “And He entered the synagogue again, and a man was there who had a withered hand. 2 So they watched Him closely, whether He would heal him on the Sabbath, so that they might accuse Him. 3 And He said to the man who had the withered hand, “Step forward.” 4 Then He said to them, “Is it lawful on the Sabbath to do good or to do evil, to save life or to kill?” But they kept silent. 5 And when He had looked around at them with anger, being grieved by the hardness of their hearts, He said to the man, “Stretch out your hand.” And he stretched it out, and his hand was restored as whole as the other.”  (Mark 3:1-5 NKJV)

We have two different people in these verses. One that was willing to obey Christ and one that was only there to test him. I tell ya, I don’t want to be those hard-hearted Pharisees!

But let’s focus on the man with the withered hand. He was willing to obey Christ and as a result, he was healed.

I wonder how often we prevent our own blessings because we aren’t willing?

How often do we allow fears, insecurities, anger, and doubt to prevent us from willingly obeying and receiving our healing?

How often have we stubbornly stayed angry at someone and ruined weeks or months or years of a relationship?

How often have we been afraid of change and unwilling to step out on faith and so remain in an ugly rut?

How often has God impressed on us to embrace His will, but we are set on our own ideas and therefore miss His blessings?

Good things come to those who are willing.

Let’s do this! Let’s step out on faith, face our fears, and stretch forth our withered hand.

8 thoughts on “Good Things Come to Those Who are Willing”