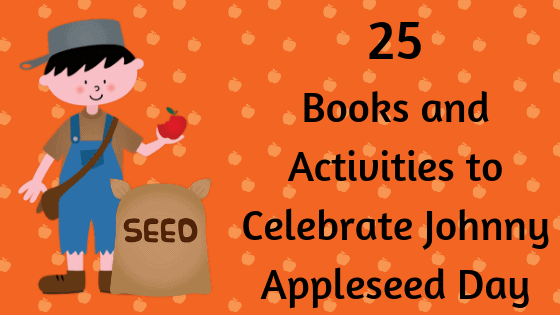 Kids and adults alike have a strange fascination with the man known as Johnny Appleseed. Every preschool and kindergarten teacher I know carefully plans lessons around Johnny Appleseed Day and as a homeschooling mom with a 4-year-old, I am joining in the fun.

Who was Johnny Appleseed Anyway?

Johnny Appleseed is one of those fun engaging characters from history in which as an adult we question whether or not he was actually real. Here is an excerpt from Encyclopedia Britannica to answer our question, who was Johnny Appleseed?

“John Chapman was born in Massachusetts in 1774. Little is known about his early life except that his mother died when he was young and that his father fought in the American Revolutionary War. He planted his first apple tree nurseries in the Allegheny Valley in Pennsylvania about 1798 and then began traveling west through Ohio, planting as he went. Walking for miles every day and sleeping outdoors, he kept well ahead of the pioneers, showing a knack for predicting where they would settle and planting nurseries in those spots.

It is important to note that the apple trees Chapman planted produced mostly cider apples, not the dessert and cooking varieties that most of us are accustomed to seeing in grocery stores. Cider apples are small and unpleasant to eat, but they can be used to produce hard cider, an alcoholic beverage that was a staple of the American diet, especially for pioneers who didn’t always have access to sanitary drinking water.

Within Chapman’s lifetime, oral accounts of his activities began to circulate. Most of these focused on his wilderness skills and his remarkable physical endurance. Chapman was also memorable for his eccentric clothing: instead of a shirt, he usually wore a sack with holes for his head and arms, and on his feet were worn-out shoes or no shoes at all. True to his nickname (which seems to have emerged late in his lifetime), he carried a bag of apple seeds.

Chapman was a devout follower of the mystical teachings of the Swedish theologian Emanuel Swedenborg, proselytizing and distributing Swedenborg’s writings as he traveled. To the rugged pioneers he encountered on his travels, Chapman’s insistence on treating all animals with kindness—even mosquitoes and rattlesnakes—in keeping with the Swedenborgian doctrine that “the life of religion is to do good” must have seemed very unusual.

Chapman died in Fort Wayne, Indiana, in 1845, having planted apple trees as far west as Illinois or Iowa. (Legend would later extend his travels all the way to California.) “

Books to read for Johnny Appleseed Day range from total tall tale to nonfiction. Most are geared toward younger children.

My kids enjoyed Johnny Appleseed by Reeve Lindbergh and illustrated by Kathy Jakobsen. It is written in poem form, but not a sing-song kind and the illustrations are wonderful. Even my 2 year old was engaged.

This portrait of Johnny Appleseed restores the flesh-and-blood man beneath the many myths. It captures the boldness of an iconic American life and the sadness of his last years, as the frontier marched past him, ever westward. And it shows how death liberated the legend and made of Johnny a barometer of the nation’s feelings about its own heroic past and the supposed Eden it once had been. It is a book that does for America’s inner frontier what Stephen Ambrose’s Undaunted Courage did for its western one.

The Best Children’s Books has a big list of suggested books for apples and Johnny Appleseed Day.

Do your kids enjoy making lapbooks? Here are two great sites to get you started. These are best for early elementary grades.

This one is on TPT but is inexpensive so I thought I’d include it. Johnny Appleseed Lapbook by Keeping up with Mrs. Harris

What’s in Johnny Appleseed’s Knapsack by Around the Kampfire

Johnny Appleseed Coloring Book by Surviving on a Teacher’s Salary

Color by Number by Printables for Kids

Are You Ready for Johnny Appleseed Day Now?

Have I filled your idea bank full of books, crafts, and activities to celebrate Johnny Appleseed Day with the young people in your life?

Is there a craft that you enjoy doing that is not included here? I’d love for you to tell me about it in the comments below.